My trip to Mexico was a wonderful dream. It is an annual trip and I began planning for it three weeks after my stroke. My ticket had been bought earlier and I was determined to visit my “familia” in Mexico and be near the seashore for the month of January.

My daughters were committed to helping me go. One made it possible for me to leave – even packing my bags, and the other offered to go with me. My husband was supportive and helpful as well being mystified by my drive to travel. He was worried about my well-being but we both knew that a break from care giving would be good for him.

My Physical Therapist tried to teach me what she could. She put me on a rocker board and would shove from behind until I lost my balance and learned to center myself. She taught me to look to each side, up, and back while walking so that no distraction would leave me in peril when stopped by neighbors. I even walked on a thick soft mat to replicate 3 inches of soft sand which I must pass through to reach the beach.

And my doctors gave their blessings.

Finally, in my fifth month post stroke, I headed off alone with only the airlines to attend me. I cried my way through the TSA and gained control of myself when my husband was out of sight. I called him to reassure him that I was fine and on my way. (He stayed in the area in case I changed my mind.)

With great relief I spotted my daughter at my first stop, and we began our trek together. 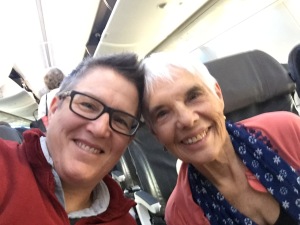 We had smooth flying except for about half an hour. No harm done save for a dicey moment in the tiny restroom when we hit wild turbulence. I contemplated opening the door for help with my jeans down around my knees. My daughter contemplated breaking the rules and coming to check on me. In truth, though, the restroom was too small for me to fall far I even if I lost my balance.

We arrived in LA for forced overnight, which left our bags in our possession. It was only by the helpful shuttle drivers that we made it to the hotel and back. Four bags, two backpacks, one wheelchair and a limping old lady…

And, the second day… from hell!

We arrived at Los Angeles airport to huge crowds and tried to find where we could recheck our bags. There were several hundred people and lines going every which way with no clear direction and no one giving good direction. It was a madhouse.

Talk about feeling helpless. I could sense my daughter’s frustration. With a huge trolley of bags and a mother and a wheelchair, I understood it! Airport personnel seemed to have no idea where should we go. Where was the airline wheelchair assistance I had been promised?

Making a long story short, we had arrived 3 1/2 hours early and after two hours we finally were able to leave our bags and go through security. OMG!

I have been precheck for years and my daughter has global Traveler Pass, but none of that was listed on our tickets. We ground our way through the line, but when we reached the x-ray they asked if I could walk without my brace through the machine. since I couldn’t I had to be patted down. They set me aside in my wheelchair and began calling for someone available. No luck. I just sat there until my daughter found the supervisor on the other end and insisted that they get me through before we missed our flight. A woman came to pat me down. Whew!

Preboarding had already begun when we reached our gate, so instead of being able to turn me over to the airline for assistance, my daughter wheeled me down the gate to the plane. There was a minor scare over whether my wheelchair would be gate checked, but finally we sat back in our lovely seats that we scored when my daughter’s seat mates were upgraded to first class.

We were on our way!

Unfortunately, trouble arrived with us in Mexico. The airline personnel hurried me into the terminal, rushed off, and left me in the passp0rt line alone. It was again my daughter’s problem to get my bags and get me through customs. She parked me to the side and went searching for those horrid bags. Little did she know that I was the first in what became a mini-warehouse for old people in wheelchairs.

Around and around the carousel inched. No bags. She ran back to me periodically but no assistance had arrived.

This continued for 40 minutes when finally three of the bags appeared. One was damaged beyond repair.Still no airline assistance

have been sent although we had asked repeatedly. The carousel rolled by empty of all bags. Where was our last bag? Suddenly, it appeared – one lonely suitcase.. The last bag’s arrival marked an hour that I had been sitting on the sidelines.

My daughter snagged an airport person walking by and insisted that she escort us through the line. She took us near where our bags were to be Xrayed, but insisted that it was against the rules to help us. We waited with bated breath to get the green light and not have our bags checked. We made it. Ha!

Our next hurdle was the agricultural check where a woman insisted that we give her papers that we didn’t have. Finally she handed us blank pages and was content with hastily scribbled answers.

One hurdle remained – reporting the damaged bag – and we were safe in the arms of my lovely familia and transported to my beloved Pueblo.

read more at Life in a Mexican Village

Tags I put on my thoughts

Where do you live?