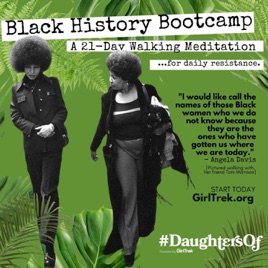 I believe in oneness – the concept that we are all one. But in the last three weeks I learned a lot about being one and having totally different experiences in and of this world.

#BlackHistoryBootCamp has taught me how little I know of the Black experience of women in the United States. I have always used my walk as an opportunity to listen to speakers and teachers about subjects that fascinate me but now I have this podcast that my daughter introduced me to. And I am listening religiously. I am no longer walking with 100,000 women because I started late and am behind, but I am enjoying it just the same.

Maybe “enjoying” isn’t the right word. Part of it is horrifying. Today the subject was Mamie Till-Mobley*, mother of Emmett Till, a young man whose life was taken in the long line of killings in the United States. Emmett Till‘s death was the beginning of a movement. I doubt if that was the comfort to his mother or to him for that matter when he was suffering a beating and gruesome torture by two white men who were never punished.

This podcast  has brought to life women I had scarcely heard of throughout in my life. This was not a subject taught in school and many of the women would not have had significant historical importance in the white classrooms of my youth. They now have significant importance to me.

More than that, it has made me privy to good conversation between friends. The black women who lead this podcast are talking of their lives, their memories, their feelings, as any friends would on a walk together. But they have opened the mic for the world to listen. The conversation is directed to black women and their allies.

I can’t claim the title of ally yet because I am not confident that I know enough not to cause harm. Not willfully – but ignorantly. I am studying and learning. I have tuned in as a listener hoping to deserve to be called an ally at this time of the Black Lives Matter movement.

Try it, you’ll like it! Powerful black woman talking together about the women who gave them inspiration. I have felt an integral part of this walk. These women are just like me, my daughters, my friends – but they have a totally different experience to share.

*Mamie Elizabeth Till-Mobley[a] (born Mamie Elizabeth Carthan; November 23, 1921 – January 6, 2003) was an American educator and activist. She was the mother of Emmett Till, who was murdered in Mississippi on August 28, 1955 at the age of 14, after allegedly offending a white cashier woman, Carolyn Bryant, at the grocery store. For her son’s funeral in Chicago, Mamie Till insisted that the casket containing his body be left open, because, in her words, “I wanted the world to see what they did to my baby.”[2] Born in Mississippi, Till-Mobley moved with her parents to the Chicago area during the Great Migration. After her son’s murder she became an educator and activist in the Civil Rights Movement.

Tags I put on my thoughts

Where do you live?